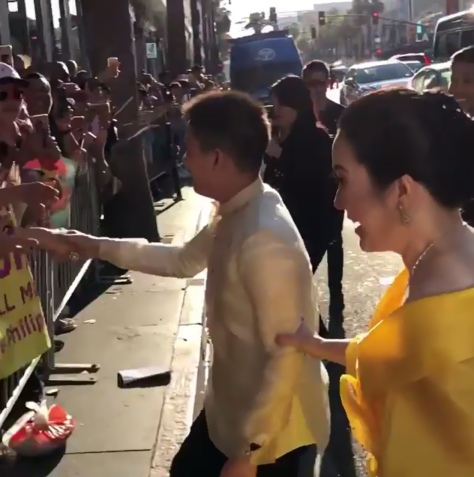 HOLLYWOOD, California (The Adobo Chronicles, Los Angeles Bureau) – Even the most famous celebrities of Hollywood know the rule: you don’t cross the line and breach security protocol at red carpet premieres.  Not even to greet your fans.

Well, Kris Aquino did just that during the red carpet premiere of the new box office film, “Crazy Rich Asians” in which the self-proclaimed Philippines ‘Queen of all Media’ appears on a wedding scene for less than a minute.

A handful of Filipino fans gathered to get a glimpse of the former Presidential sister, many of them (who haven’t seen the film) thought Aquino was the lead star. We’ll she’s been acting that way.

So, back to the Hollywood protocol.

Because she violated time-honored rules, the Hollywood Association of Film Producers and Others (HAFPO) has passed a resolution at its executive meeting last night, permanently banning Aquino from personal appearances in Hollywood.

Well, Aquino had her one-minute of fame, but she’s paying dearly for it.