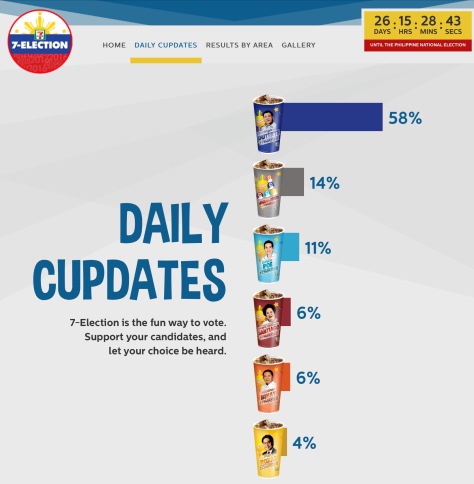 MANILA, Philippines (The Adobo Chronicles, Manila Bureau) – In the U.S., voters are confused about how delegates are awarded to the presidential candidates in the country’s state primaries, caucuses and conventions.  In the Philippines, voters are very confused. Period.

Earlier, we reported that overseas Filipino voters have complained that they do not recognize two candidates in the official election ballot:  Mar Roxas Daang Matuwid for president and Leni Robredo Daang Matuwid for vice president. They don’t recall the Daang Matuwids ever filing their certificates of candidacy before the Commission on Elections (COMELEC).

Now, Filipinos participating in the 7-Eleven presidential poll in which soda buyers can vote by picking the cup bearing the name and image of their candidates of choice, are complaining as well.

The latest total results show that Davao City Mayor Rodrigo Duterte is leading in individual 7-Eleven stores as well as all stores combined, by a very wide margin: 58% compared to the runner-up at 14%.

But voters are confused as to who the runner-up in the poll is.  His/her name is Undecided.  And just like with the Daang Matuwids, Filipinos don’t remember Undecided filing a certificate of candidacy.

The COMELEC has a lot of explaining to do these days.