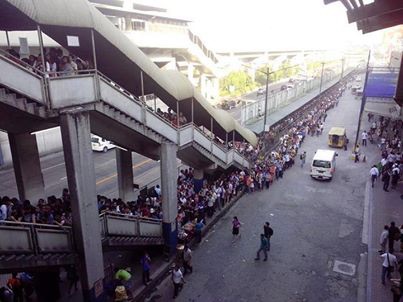 MANILA, Philippines (The Adobo Chronicles® ) – MRT, Metro Manila’s much-maligned light railway transit system is, after all, not the worst in the world.

Filipinos came to the realization that the long lines leading up to the ticket booths and platforms, packed trains and frequent mechanical breakdowns are nothing compared to the commute time woes experienced by riders of more high-tech mass transit counterparts in other countries, including neighboring Japan.

The ‘ah-ha’ moment for Pinoys came as this video of commute hours in Japan surfaced on the Internet. It puts the phrase, ‘packed like sardines’ to shame.

Once in a while, we should all pause and count our blessings

2 thoughts on “FILIPINOS COUNT THEIR BLESSINGS; MRT NOT THE WORST IN THE WORLD”