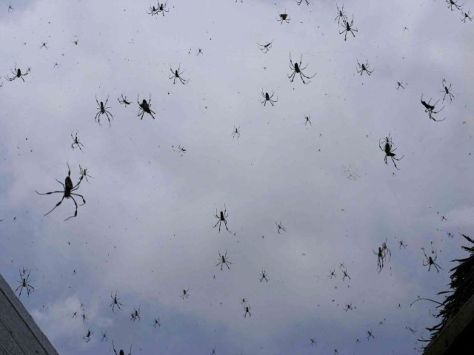 GOULBURN, Australia (The Adobo Chronicles) – Many of us have heard the phrase, “It’s raining cat’s and dogs,” and it’s really more of a figure of speech.  We’ve also heard “It’s raining men,” but that’s a 1980’s hit song by The Weather Girls.

Residents of Goulburn, Australia, awoke this month to find their town shrouded in eerie, silken webs, while millions of tiny spiders rained down from above, local news reported.

“The whole place was covered in these little black spiderlings and when I looked up at the sun it was like this tunnel of webs going up for a couple of hundred meters into the sky,” resident Ian Watson told the Sydney Morning Herald. His house looked like it had been “abandoned and taken over by spiders,” he added.

Australia is known as a country for all seasons. You can do practically anything at any time of year.  There are four seasons (winter, spring, summer and fall) across most of the country and a wet and dry season in the tropical north.

With this latest phenomenon, however, Australia will add a fifth season during the time when spiders fall from the sky and the ground is blanketed by white spider webs.

The new season will be called Arachnoid season.