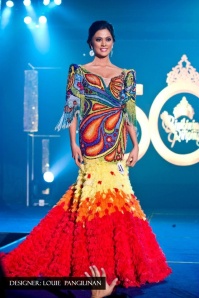 Manila, Philippines – In a television interview prior to her departure for Moscow, Russia to compete in this year’s Miss Universe Pageant, Miss Philippines Ariella Arida tried to address criticism about her English language skills. Unfortunately, her response to the interview question put her in hot water, when she said that Latina candidates in the pageant can’t even speak a complete English sentence. Her comment drew protests from citizens of Latin countries who described her response as offensive.

Miss Arida has since apologized for her comment. But that hasn’t stopped her fans and supporters from petitioning the Binibining Pilipinas Charities, franchise holder of the Miss Philippines Universe Pageant, to allow Miss Arida to answer the final question in her native Tagalog tongue should she be selected as one of the top five finalists in the Miss Universe Pageant. Miss Arida is among the early favorites to win the crown.

Past Philippine bets in this most prestigious beauty pageant have done very well in the competition, reaching the finals only to lose the crown because of their not-so-smart response to the final question, in English.

Fans and supporters believe that it would be best for Miss Arida to answer the final question in Tagalog and avail the services of an interpreter so that she can better express herself and avoid a potential blunder response that has  cost past Philippine candidates the much-coveted crown.

Binibining Pilipinas Charities founder and chairperson Stella Marquez-Araneta has not responded to the fans’ request.

Moscow, Russia – Since the Miss Universe organization first implemented public online voting for Miss Photogenic and “fan favorite,” the Philippine candidate has always been among the top candidates, if not the winner of the special award — thanks to 30 million Filipinos who have Internet access, not to mention multiple email accounts. That’s almost a third of the Philippines’ total population of about 100 million.

The Miss Universe organization knows how passionate Filipinos are when it comes to their beauty queens and that they will do everything they can to ensure their candidate’s victory.  The organization, however, feels that online voting results may not totally reflect the true merits of the competition, equating the results to a  “hometown decision.”

Because of this, the Miss Universe organization announced that the Philippines has been banned from online voting in this year’s pageant to be held November 9 in Moscow, Russia. It said Internet votes emanating from the Philippines will be automatically blocked.

The announcement angered Filipino netizens who felt that the ban would diminish the chances of the Philippine candidate, Ariella Arida, in winning the Miss Photogenic or fan favorite award.

Despite the ban, beauty pageant experts and enthusiasts have placed Miss Arida in the initial circle of favorites to win the title, which would potentially give the Philippines its third major beauty title this year, following the victories of Megan Young as Miss World and Johanna Datul as Miss Supranational for 2013.

Las Vegas, Nevada — This year’s Miss Universe Pageant will be held on November 9 in Moscow.  The crowning ceremonies will be at the Crocus City Hall.

The Miss Universe organization issued new rules this week.  The contestant who wins in the Best Evening Gown competition will be exempted from the final question. It is common knowledge that many frontrunners in the pageant end up losing the crown because of not-so-smart answers to the final question asked of the top five finalists.

The last three years saw the Philippines so close to winning the coveted crown, so the Binibining Pilipinas  Charities, franchise holder of the Miss Philippines Universe Pageant,  is leaving no stone unturned to win the crown this year.  The  Charities has commissioned a top Filipino designer to design the eveninng gown of Miss Philippines to ensure that she is exempted from the final question.

Aware that Pageant owner Donald Trump has a hand in deciding the Best in Evening Gown winner, the Filipino designer came up with a design that incorporates the Trump Tower in Las Vegas.  The designer said that  Miss Arida, whose features are a cross between Beyonce and Nicole Scherzinger of Pussycat Dolls, will look stunning in this never before seen gown.

The Adobo Chronicles wishes Miss Arida  the best of luck!