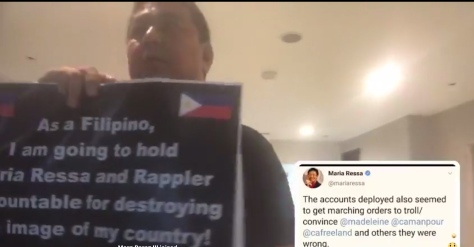 Today, Ressa told The Adobo Chronicles that she is willing to personally meet and debate with Lopez and Aquino, but in a neutral environment, certainly not at Rappler’s offices.

Ressa said she wanted the meeting and debate to be held at Kris Aquino’s Chowking franchise restaurant on Quezon Avenue corner Araneta Avenue in Quezon City.

Ressa said that since she’s facing up to two  “Dutertards,” she will be bringing along her star reporter, Pia Rañada so that it’s all fair and square.

Kris Aquino was honored that her restaurant was chosen the venue for this historic event and she said that  the debaters and their supporters will be treated to complimentary Lumpiang Shanghai.\

(Editor’s note: Jovbev is not related to Kris)