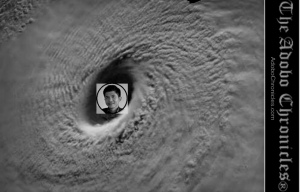 Glenn is the world’s most powerful typhoon of the year, swirling towards the Philippines.

As of 6 pm Sunday, Glenn was spotted 453 kilometers southeast of Metro Manila, carrying maximum sustained winds of 225 km/h near the center and gusts of up to 260 km/h.

President Rodrigo Duterte has ordered the suspension of classes at all levels, and government workers have been given the option to stay at home, except those attending today’s Seante hearing on the 2016 electoral fraud.