MANILA, Philippines (The Adobo Chronicles®) – It is unprecedented in the history of the Philippines, and perhaps even in the world: a population and electorate divided equally four ways.

We are referring to a new national poll soon to be released by the Social Weather Systems (SWS), the Philippines’ leading pollster and research firm.

In a survey of likely Filipino voters in the upcoming 2016 presidential elections, the leading candidates each garnered an approval rating of 25% of all respondents, with no room for a margin of error.

Of the four candidates included in the poll, three — Senator Grace Poe, Vice President Jojo Binay and former Interior and Local Government Secretary Mar Roxas —  have officially declared their candidacy for president, while one, Davao City Mayor Rodrigo Duterte, is yet to declare (although he has repeatedly denied that he intends to run).

However, in a separate scenario where only the three declared candidates will vie for the presidency, each received  33%, with 1% of respondents still undecided. 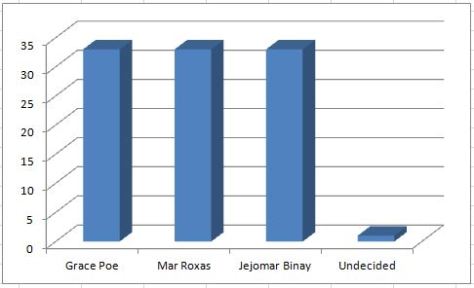 In either scenario, it is a statistical tie, paving the way for the most interesting and hotly-contested Philippine presidential elections ever.

In order to confirm the SWS poll, The Adobo Chronicles is conducting its independent survey among our readers.  Please participate below: