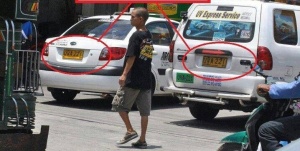 Manila, Philippines — It is definitely more fun in the Philippines – exactly as the Department of Tourism advertising mantra says – not only because Filipinos think up of the smartest and sometimes stupid things, but get away with it.

In a surprise move, the country’s Department of Motor Vehicles has actually adopted what was once a smart yet illegal activity, as an official policy.  Effective July 15, 2013, the Department will be issuing two-for-one vehicle licenses whereby citizens or businesses owning two or more vehicles can purchase identical license plates for the price of one. This new policy is expected to solve the problem of many vehicle owners not obtaining the proper license plates because the cost and fees are too expensive.

Asked for his reaction to the two-for-once license plates, Manila Mayor Joseph Estrada, who as president of the Philippines was impeached and convicted for corruption, said “I don’t care either way. I am exempted from the coding rules and I always have police car escorts wherever I go so traffic is not a problem for  me.”

Already, some enterprising Filipinos are planning to buy the two-for-one license plates and sell the other for half the price.