EMBARGOED UNTIL 10am EST, Wednesday, June 26, 2013
Exclusive to AdoboChronicles.com 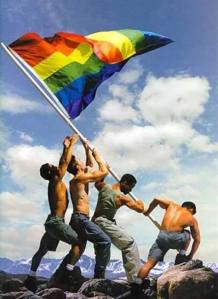 District of Columbia – In a decision considered the most controversial in its entire history, the Supreme Court of the United States today struck down the Defense of Marriage Act in its entirety, handing the LGBTQQI community its greatest victory since Stonewall.

The Supremes voted 5-4, with Chief Justice John Roberts casting the deciding vote. Justices who favored striking down DOMA aside from Roberts were Thomas, Scalia, Alito and Breyer. In the majority decision, penned by Roberts, the high court said of DOMA, “What was Congress thinking? There was no compelling reason to defend marriage. No one was attacking marriage. The LGBTQQI community was, as a matter of fact, all for it. The community members simply wanted to be included.”

In a dissenting opinion, penned by Ginsburg, the minority said, “This is a day of infamy. It marks the end of what is left of the liberal agenda. What’s next for us as justices? It will be a boring rest of the term for us.” Outside the court chambers, Ginsburg was quoted as saying, “It’s time for me to retire.”

On the other landmark case, Prop 8, the justices were unanimous in declaring that those who brought the case before the court had “no standing.” In an unprecedented move, the court sent back the Prop 8 case to California Lt. Governor Gavin Newsom. The court said that since Newsom started this whole thing on gay marriage in California when he authorized to issue marriage licenses to gay and lesbian couples in 2004, he should just make an executive decision to strike down Prop 8.

The decision comes just a few days before the biggest Pride celebration in the country. The San Francisco Pride Committee quickly convened a board meeting during which it decided to cancel Sunday’s Pride Parade and Festival. “We no longer see the need to stage a separate Pride celebration,” the committee said. “We are now equal with everyone else.”