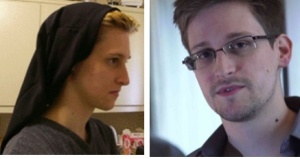 Manila, Philippines – Edward Snowden, the former U.S. National Security Agency contractor who admitted revealing secret surveillance programs to media outlets, and who has been charged with espionage, has reportedly been sighted in Manila, roaming the traffic-ridden streets of the Philippine Metropolis.  Manila, as many will recall, has been described as the “gates of hell” in Dan Brown’s latest best-selling book, “Inferno.”

An eyewitness said he saw Snowden dressed as a Catholic nun and entering a gated mansion owned by the Archdiocese of Manila. Analysts surmised that the Catholic Bishops may be unaware that the supposed nun was Snowden because of their lack of skill in picking out cross-dressers from a crowd.

The U.S. Embassy in Manila, upon hearing of the report, immediately filed a formal request with Malacanang Palace, the official residence of Philippine President Noynoy Aquino, for help in bringing Snowden into custody. It was unclear whether the Philippine Government would have the balls to gatecrash the Catholic mansion to search for Snowden.  While the Philippine Constitution provides for the separation of church and state, the Catholic Bishops Conference of the Philippines remains to be a driving force in the conduct of government affairs.  Politicians are constantly fearful that any action on their part that would piss off the bishops will lead to the former’s political demise, as was the case with Presidents Ferdinand Marcos, Joseph Estrada and other high-ranking government officials.

It was not immediately known if Snowden plans to seek political asylum in the Philippines, after several unsuccessful attempts to do so in China, Ecuador, Cuba and Russia. 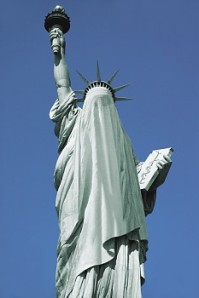 Washington, D.C. – In what was considered worse than a filibuster, the Republican-controlled U.S. House of Representatives, whose Tea Party-identified members earlier maneuvered to convene a special  last- minute session last night that lasted till 12:01 a.m., passed sweeping legislation that critics say is tantamount to “defacing the statue of Liberty and all that it stands for.”

The hastily-convened session was the House Republicans’ response to last week’s bi-partisan passage of Senate Bill 744 on Comprehensive Immigration Reform that establishes a path to citizenship for this country’s estimated 11 Million undocumented immigrants while taking steps to secure the U.S. border.

“The Senate Bill is DOA (dead on arrival) at the House of Representatives,” Speaker John Boehner said after the Senate passed the bill 68 to 32.

The House bill contained an order for the National Park Service to replace the historic plaque beneath the 127 year-old statue of Liberty on Ellis Island.  The plaque, as millions of visitors to the iconic monument are very familiar with, contains a poem written by poet Emma Lazarus. The opening of the poem, “The New Colossus,” refers to the Collosus of Rhodes, an ancient statue of a Greek titan. But Lazarus then refers to the statue which “shall” stand as a “mighty woman with a torch” and the “Mother of Exiles.” 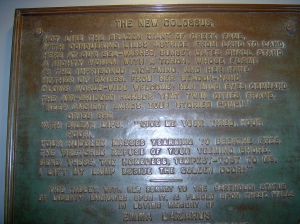 Later in the sonnet are the lines which eventually became iconic:

“Give me your tired, your poor,
Your huddled masses yearning to breathe free,
The wretched refuse of your teeming shore,
Send these, the homeless, tempest-tossed to me,
I lift my lamp beside the golden door!”

The legislative order gives the National Park Service 7 business days from the passing of the House Bill to replace the plaque with new lines, as follows:

“Give me your doctors, your nurses, your artists, Your scientists, your computer geeks,
Send these,  who have the money to invest, Those with Ph.D.’s and Masters degrees, the best and brightest of your European shores,

I lift my lamp beside the golden door, but only for those I mention above!”

An amendment to the “new poem,” and later adopted as part of the approved bill, was authored by Minnesota’s Michelle Bachmann.  The addition reads:

“Let it be known that I have no tolerance for sexual deviants nor any interest in reuniting families, especially if they come from the continents of color.”

Asked at a press briefing following the bill’s passage why the legislators didn’t bother to amend the first part of Lazarus’ poem, Bachmann said, “there was an overwhelming agreement that the first part of the original poem, accurately represents Congress’ ancient thinking, so we let it stand.”

As to the question on how the bill will help secure the U.S. borders, Bachmann said that there is a provision in the bill that seeks to build fish pens around Ellis Island and the rest of the New York harbor. 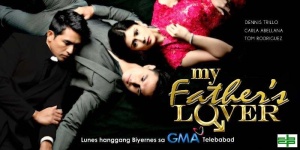 Manila – It was just a matter of time before the influential Catholic Bishops Conference of the Philippines poked its ugly head into the growing popularity of “My Husband’s Lover,” a new TV series that tackles the bold theme of homosexuality.

GMA 7 quickly moved to cling to the ratings momentum created by the cancelled series by replacing it with a new show which reportedly has the full blessing of the Catholic Bishops.  The new show is titled, “My Father’s Lover.”