SINGAPORE (The Adobo Chronicles) –  Who will be the winner in the grand finals of ‘Asia’s Got Talent?’

Before you start flooding the inbox of The Adobo Chronicles with angry email, read on. We’re not saying the Filipinos will not win. On the contrary, one of the Filipino acts will be the winner!

It will be up to the voters to choose their favorite act from nine finalists: dancers Gao Lin and Liu Xin (China), musicians Khusugtun (Mongolia), dancers Triqstar (Japan), young rock stars The Talento (Thailand), tap dancers Dance Thrilogy (Singapore) and the rest from the Philippines:

Ten-year-old singer Gwyneth Dorodo took her flair to the next level when she carried through a moving interpretation of Sia’s “Titanium” in her final performance.

Taking the Super Bowl to the stage, hip-hop dance group Junior New System in football-inspired costume danced along a mashup of a bevy of songs and even waved the Philippine flag proudly.

Embodying the true meaning of a “diva,” classical singer Gerphil Flores delivered a spine-chilling rendition of “The Impossible Dream” from the musical “Man of La Mancha.” Wearing a golden dress, Gerphil literally stood on a pedestal as she belted out high note after high note, leaving the audience in awe and wanting more. Judge David Foster, who pressed the Golden Buzzer for Gerphil during the auditions, was left ecstatic. “I promise you, the world is gonna know about you. That’s a promise.”

Ingenuity and inspiration were what shadow play group El Gamma Penumbra exemplified when they showcased an arresting presentation about conservation of Mother Earth.Performing to “Pocahontas” theme song “Colors of the Wind,” the group showed the ways people destroy nature like hunting, dynamite fishing and littering. But they didn’t forget to give a lesson on how to take care of the planet.

So back to how the final winner is chosen: by viewer voting.

It just makes sense that voters from China, Singapore, Japan, Mongolia and Thailand would vote for their respective candidates. And so will the Filipinos. But with four acts in the grand finals, the Filipino vote would be split, four ways or what not.

In the past, where Internet voting determined the winner of international competitions — like the Miss Universe Photogenic award, the Filipino candidate ended up winning, almost 100% of the time. Talk about Internet and text-savvy Filipinos — all 100 Million of them!

So while we predict the winner of ‘Asia’s Got Talent’ to be one of the Filipino acts, it will be determined not by the Filipino vote alone but votes from other Asian countries.

But then, miracles happen in the Philippines, so maybe, just maybe, the Filipinos will unite to vote for a single Filipino act.

We’re really torn between El Gamma Penumbra and Gerphil Flores. Both acts are teeming with talent — so impressive, so endearing.  We’d like for AGT to declare a tie but what are the odds of votes being split equally between the two?

So, we are going to predict that El Gamma Penumbra will win.  While we’ve seen similar acts in other versions of the show, like ‘America’s Got Talent’ or ‘Britain’s Got Talent,’ Penumbra’s act stands out because their artistry is consistently coupled with universal messages like peace, love, tourism and protecting the environment.

But don’t feel bad for Flores.  She is already a winner.  Expect David Foster to take her under his wing, like he did with Charice. This will not be the last time you see — and hear — Flores. 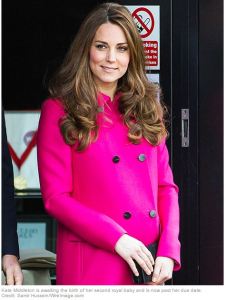 LONDON, England (The Adobo Chronicles) – The pregnant Duchess of Cambridge is now four days past her due date.

Kate Middleton, 33, and husband Prince William were scheduled to welcome the second royal baby on Thursday, April 23, but the day came and went with no sign of another little one. This would be their second child.  Prince George was born on July 22, 2013.

In the Philippines, another royal baby watch has begun.

Actors Dingdong Dantes and Marian Rivera have both confirmed that they are expecting a child.  Although not exactly royalty, the couple are looked upon as Prince and Princess after their wedding last December was billed as a “Royal Wedding.”

The wedding was the most talked about, expensive and paparazzi-filled event, rivaling that of the British royalty in terms of the wedding gown, bridal car, church ceremony (officiated by eight bishops and seven priests), and life-sized wedding cake, among others.  The Best Man was none other than the president of the Philippines.

Filipino netizens have started to get involved in the baby naming process, suggesting names for the royal child.  An overzealous fan of the couple even created a website that has ‘pictures’ of what the baby boy or baby girl will look like.

Fairy tales do come true in the Philippines.

MANILA, Philippines (The Adobo Chronicles) – If you live in the Philippines and are reading this story, be forewarned that re-posting it on your Facebook or Instagram account or re-tweeting it is now a crime, punishable by fine and jail time.

Tired of being constantly criticized by The Adobo Chronicles, So What’s News (SWN), The Professional Heckler, Mosquito Press  and many others, President NoyNoy Aquino, with full support from the Senate and the House of Representatives, issued an Executive Order banning re-tweets and re-posts of satirical articles.

The Philippines’ Department of Justice (DOJ) is currently reviewing international laws on Free Speech to see if international sites like The Onion, The Borowitz Report and The Daily Currant, can also be banned from Philippine social media.

The idea for the Executive Order actually came from Turkey.

Recently, a provincial court in Turkey sentenced a college student, Meral Tutcali, to one year in prison for the offense of “insulting a public official” by sharing a satirical news story about a regional governor on Twitter.

The trial was held in Adana, a southern Turkish province, after a complaint by the region’s governor, Huseyin Avni Cos, who discovered last year that he had been mocked in a photograph and headline on Zaytung, a Turkish site akin to The Onion.