Hollywood, California – Sometimes, it pays to mess up. Especially in Hollywood. In front of thousands of Hollywood celebrities and millions of television viewers.

Less than  24 hours after the 86th Oscar Awards were handed out in glittering, snow-flaky ceremonies at The Dolby Theater in Hollywood, the board of governors of the Academy of Motion Picture Arts & Sciences announced that while it has received thousands of emails asking that Ellen DeGeneres be again named as the host of next year’s Oscars, it has made an irrevocable decision to name John Travolta as host of the 87th Oscars.

The board of governors was reportedly impressed by Travolta’s hilarious unscripted spiel when he introduced Idina Menzel as “Adele Dazeem.” Menzel performed the Oscar-nominated song, “Let It Go,” from the Disney animated film, “Frozen.” The song went on to win the Oscar for best song.

“We’re always looking for talented hosts who are funny, can do impromptu monologues and acts, and make the four-hour awards ceremony anything but boring,” said Academy president Cheryl Boone Isaacs.  “Our governing board members thought that having a host who will mispronounce and mess up with the names of nominees, winners and presenters would be quite a show stealer,” she added.

So, Oscars fans, gird your loins and brace for the funniest monologues you will ever hear on Oscar night.  For example:

“Welcome to the 87th Ocsars. I am very honored to be in the company of Hollywood greats like Mereen Strips, Martini Scoreski, Jennifer Warlence, Nidsey Porter and Steven Borgspill.  My name is Von Tratolva, and I’m your host for this evening.” 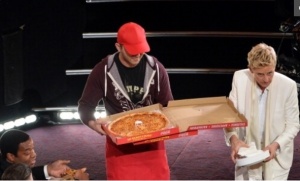 Hollywood, California (EXCLUSIVE to The Adobo Chronicles) – The still unnamed pizza delivery guy who brought three large pizzas to the Oscars last night is undoubtedly now the most famous pizza delivery guy not just in Hollywood but all over the world. But everyone is wondering whether or not he received the fat tip collected by Oscar host Ellen DeGeneres.

But he got something else. Television viewers will recall that earlier in the show, DeGeneres handed lottery tickets (scratchers) and a quarter to Oscar nominee Bradley Cooper (and presumably to others who didn’t win an Oscar).

The Adobo Chronicles learned that Cooper gave the lottery tickets to the pizza delivery guy. Upon his return to work after his delivery, the pizza guy scratched the tickets and one of them had a handsome prize waiting for him : $10,000!

It doesn’t end there. The pizza guy has been invited for a guest appearance this week in the Ellen Show and Oscar-winning director Martin Scorsese has offered him a meaty (read: pepperoni)  role in one of his forthcoming films.

“He wore his baseball cap througout the televised pizza segment of The Oscars, but he is actually very good looking and has the star quality Hollywood is always looking for ” DeGeneres said of the pizza guy.

So the Hollywood legend continues: If you want to be in films in Hollywood, start by waiting on tables and tending bar. Or be a pizza delivery guy.

On Saturday, Ambassador Philip Goldberg encouraged Filipinos to travel to the U.S., saying the visa application process is relatively “easy.”

“The majority of people who apply are approved for visas. It’s rather a standard and very easy process.  You make an appointment, you go in, you have an interview and as long as you are a stable resident of the Philippines, you’re going to get the visa and you enjoy the United States,” Goldberg told reporters at the U.S. Embassy’s road show at a mall in Pasay City.

Soon after he made this statement, Filipinos started lining up in front of the U.S. Embassy on Roxas Boulevard and by noon Sunday, police authorities estimated the crowd at 500,000. Independent media reports say that the crowd may swell to one million by the time the Embassy offices open at 8:00 a.m. on Monday.

Manila mayor Joseph Estrada said the city has not seen a crowd this big since last year’s Million People March which was organized to protest the pork barrel scandal that rocked the Philippine government.

U.S. Secretary of State John  Kerry is scheduled to fly to Manila later today to meet with Goldberg and deal with this developing situation.