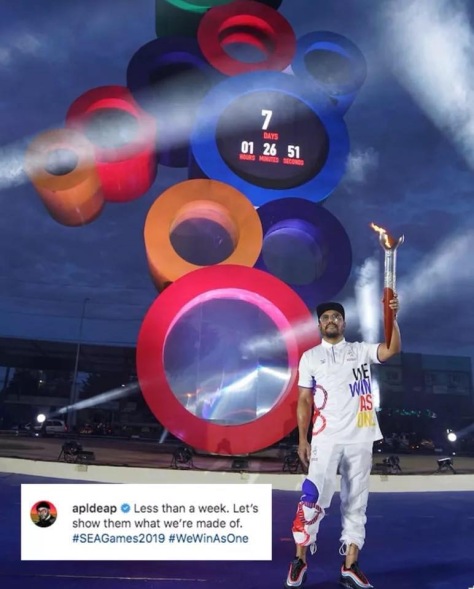 NEW CLARK CITY, PHILIPPINES (The Adobo Chronicles, ) – A few Filipinos, mostly associated with the political opposition and yellow cult have been very critical of the Phiippines’ hosting of the 30th South East Asian (SEA) Games this year.

Many have questioned their loyalty and patriotism for choosing to bring up only the negatives about the country’s efforts to put up a good show.

But one Filipino, apl.de.ap of the popular American rap group Black Eyed Peas, is taking the high road.  He makes no secret of his extreme pride  for his Filipinoness and 100% support for the Phiippines’ hosting of the 2019 SEA Games.

Standing before a giant replica of the Game’s logo, the artist proclaimed, “Let’s show them what we’re made of.”

(And in case you haven’t noticed, there is no yellow color on the logo.)