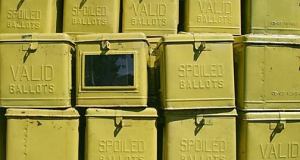 MANILA, Philippines (The Adobo Chronicles, Manila Bureau) – Former Senator Bongbong Marcos had cited three causes of action in his demand for a manual recount of the 2016 Vice Presidential elections. The first is the allegation that the automated election system in the 2016 polls was compromised and could not be relied on to declare the correct winner. This was dismissed by the Supreme Court, sitting as the Presidential Electoral Tribunal (PET).

The second cause of action is a revision of ballots or a manual recount of ballots in the contested precincts, while the third cause of action seeks the annulment of the 2016 election results for VP in Lanao del Sur, Basilan, and Maguindanao due to alleged terrorism, violence, force, threats, intimidation, pre-shading of ballots, and vote substitution.

Yesterday, Marcos filed a fourth cause of action before PET. He now wants a manual recount of 100% of votes in the VP election, accusing Leni Robredo’s camp of using a flawed formula to manipulate the results.

Marcos cited Robredo’s flawed multiplication of 40 x 4 = 1600. He said he will show that the VP election results were padded 1,000 over to ensure a victory for Robredo.