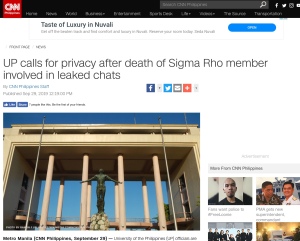 QUEZON CITY, Philippines (The Adobo Chronicles, Quezon City Bureau) – CNN is reporting that University of the Philippines (UP) officials are asking students to drop talk about a recent hazing issue which surfaced in an alleged conversation among Sigma Rho members, following the death of one of the fraternity’s brothers.

UP Diliman Chancellor Michael Tan said that all students, faculty and other concerned parties should stop posting and forwarding messages on social media related to the death of the Sigma Rho member. “Let us do this out of sense of decency and respect for the privacy of the family,” Tan said.

The first to react to U.P.’s appeal was Senator Risa Hontiveros who told The Adobo Chronicles that would be filing a bill to privatize U.P. Diliman.

”We hear you, Chancellor Tan,” Hontiveros said, “so we are responding positively to your appeal for privacy by proposing legislation to privatize the state university in Diliman and possibly the other U.P. campuses nationwide.

Senate President Tito Sotto expressed support for the proposal, saying it will save a lot in terms of taxpayer money.