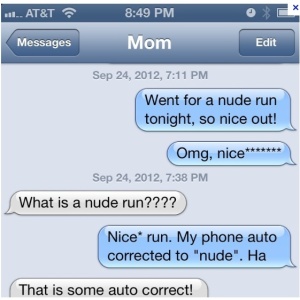 Cupertino, California – Facing mounting criticism for the autocorrect feature of its smart phones and tablets, Apple today announced that it will be issuing an update to its iOS 7 that will virtually eliminate the much ridiculed feature which has embarassed a lot of people and cost them their personal relationships.

In place of autocorrect, iOS 7-C  will feature an automatic copy editor that will correct spelling and grammatical errors on social media.

Netizens have long been annoyed by grammatical errors on posts, texts and other Internet messages, so this iOS update is definitely a welcome relief.

Apple will employ copyeditors at its Cupertino headquarters to secretly monitor all posts and messages from its customers. These “live” persons will flag any grammatical errors and correct them in real time.  Apple has reportedly hired hundreds of copy editors who were fired or laid off from newspapers and other media outlets  as a result of downsizing, mergers and bankruptcies.

Examples of grammatical errors that will disappear from social media are the misuse of words like “It’s and Its,” “There, They’re and Their,” “Affect and Effect,” “Lie and Lay.”

“Social media will also see a vast improvement in the use of commas, apostrophes, quotation marks, among others,” Apple said.

5 thoughts on “APPLE TO DUMP “AUTOCORRECT””